Experimental COVID-19 vaccine is made available to Chinese residents

Officials in an eastern Chinese city is offering its residents an experimental coronavirus vaccine for £46 per person - despite the fact that its effects remain unproven.

Key workers and those at high risk from COVID-19 would be among the first to receive the jabs, said the health authority in the city of Jiaxing, Zhejiang province.

Other 'volunteers' aged between 18 and 59 with 'urgent need for vaccination' may also apply to receive the vaccine developed by the state-owned drug firm Sinovac Biotech, a statement said.

China has been inoculating essential workers with COVID-19 vaccine candidates under an emergency use programme launched in July.

But this is the first time the Chinese government has publicly made such vaccine available to ordinary citizens.

It comes as a Beijing official has previously announced that a coronavirus vaccine could be ready to use for the general public in less than three weeks.

But some residents in Jiaxing have now been offered with a double-dose experimental coronavirus vaccine that costs 400 yuan (£46), according to a statement released by the city's centre for disease control and prevention on Thursday. 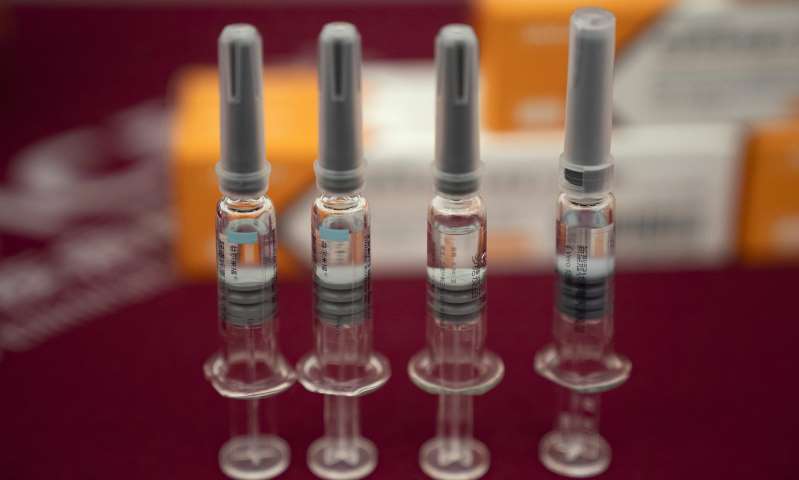 The vaccine candidate called CoronaVac, developed by Sinovac Biotech, will be provided to people, aged between 18 and 59, who have 'urgent need for vaccination'.

Residents will be given two shots, which are administered up to 28 days apart, after signing an inoculation agreement as the vaccine's effects have yet to be proven.

'As it has not officially been registered for the market, this type of vaccine is only approved for urgent use', the notice added.

But the officials did not specify how many people would receive the experimental vaccine or when the programme would start.

A CDC staff member told state media the Global Times: 'Details of when and how the vaccines will be distributed to [the vaccination sites] across the city are still being worked out.'

The vaccine from Sinovac Biotech is also in late stage trials in Brazil, Indonesia and Turkey, and the company has said that an interim analysis of Phase 3 trial data could come as early as November.

Bio Farma, a state-owned firm in Indonesia which has reached a deal for at least 40 million doses from Sinovac, said this week the vaccine will cost around 200,000 rupiah (£10.48) per dose when it becomes available in the southeast Asian country.

Chinese authorities have yet to release pricing details for potential COVID-19 vaccines. But Beijing has said that while reasonable profits for companies are permitted, COVID-19 vaccines should be priced close to cost.

China has four of the world's eight vaccines that are in the third phase of trials, typically the last step ahead of regulatory approval, as countries race to stub out the virus and reboot battered economies.

At least three of those have already been offered to hundreds of thousands of essential workers under an emergency scheme launched in July with no reported adverse effects, according to officials.

A unit of state pharmaceutical giant China National Pharmaceutical Group (Sinopharm) and US-listed Sinovac Biotech are developing the three vaccines under the state's emergency use programme.

During an interview with state broadcaster CCTV in September, an official with the Chinese Center for Disease Control and Prevention (CDC) said that a coronavirus vaccine could be ready for Chinese citizens as early as November.

'It would be about November or December,' Wu Guizhen, CDC chief biosafety expert, told the state media. 'Ordinary people can be vaccinated with the vaccine, because according to its phase III clinical results, the current progress is proceeding very smoothly.'

But the World Health Organization has warned that widespread immunisation against COVID-19 may not be on the cards until the middle of next year.

Tedros Adhanom Ghebreyesus, the head of the World Health Organization, said last month that the U.N. health agency will not recommend any COVID-19 vaccine before it is proved safe and effective.

His comment comes after Russia and China have started using their experimental vaccines before large studies have finished and other countries have proposed streamlining authorisation procedures.

We have 146 guests and one member online