Captain Tom Moore, 100, in hospital as he battles coronavirus and pneumonia

NHS hero Captain Sir Tom Moore is being treated in hospital after he tested positive for Covid.

The 100-year-old WW2 veteran has raised more than £30million for the NHS during the coronavirus pandemic.

In a statement released by his daughter Hannah Ingram-Moore today, she said her dad tested positive for coronavirus last week while being treated for pneumonia.

Sir Tom was reportedly unable to have his Covid vaccine before catching the disease because of his pneumonia medications.

He was taken to a ward at Bedford Hospital today after requiring extra help with his breathing but is not in intensive care.

The statement reads: "I wanted to update everybody that today my father was admitted to hospital.

"Over the last few weeks he was being treated for pneumonia and last week tested positive for Covid-19.

"He was at home with us until today when he needed additional help with his breathing.

"He is being treated in a ward, although he is not in ICU. 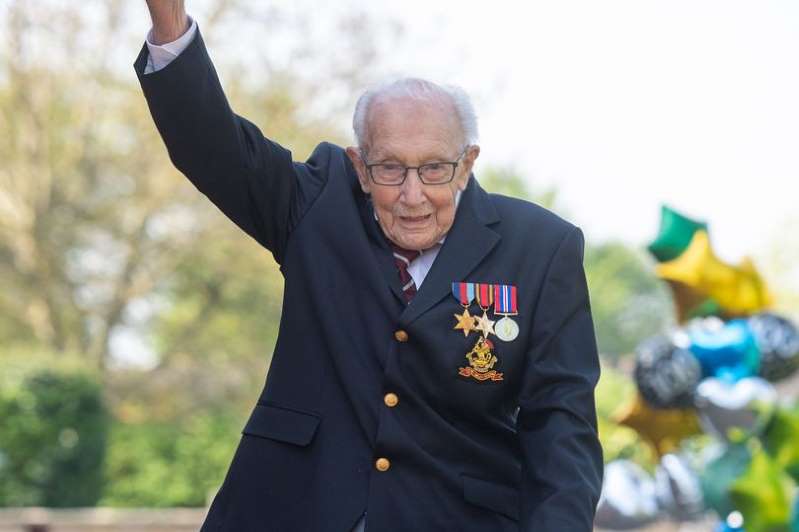 "The medical care he has received in the last few weeks has been remarkable and we know that the wonderful staff at Bedford Hospital will do all they can to make him comfortable and hopefully return home as soon as possible.

"We understand that everyone will be wishing him well. We are of course focusing on my father and will update you when we are able to. Hannah x"

Prime Minister Boris Johnson said on Twitter: "My thoughts are very much with @CaptainTomMoore and his family. You've inspired the whole nation, and I know we are all wishing you a full recovery."

Labour leader Keir Starmer also wished him well, adding: "The whole nation hopes you get well soon @captaintommoore. You've been an inspiration to us all throughout this crisis."

Michael Ball, who recorded a charity single with Capt Sir Tom that reached number one, tweeted: "Love and prayers for @captaintommoore and his lovely family as he battles this bastard of a virus.

"Stay strong Sir. We are all here for you."

Other figures have also sent their regards to Capt Sir Tom, including vaccines minister Nadhim Zahawi who said he was “praying” for him and Mayor of London Sadiq Khan who thanked the NHS for his care.

“Hoping for a speedy recovery and to see Captain Tom back home with his family soon,” Mr Khan added.

Sir Tom, born in Keighley, West Yorkshire, raised more than £33million for the NHS by walking 100 laps of his garden in Marston Moretaine, Bedfordshire.

After his 100th lap, with his medals on display, he gave reassurance to a worried nation, which had seen their lives turned upside down by the virus.

He said: “You’ve all got to remember that we will get through it in the end, it will all be right.

“For all those people finding it difficult at the moment, the sun will shine on you again and the clouds will go away.”

He was knighted by the Queen, hit number one in the singles chart and received a Pride of Britain award.

He served as a Second Lieutenant in Burma and took part in the amphibious assault on Arakan.

The national treasure was involved in the final push to the Burmese capital of Rangoon in what has become known as 'The Forgotten War'.

He previously encouraged the British public to stay strong as the country entered its second lockdown.

His charity - The Captain Tom Foundation - launched a campaign called Walk and Talk which aims is to get as many people as possible walking and talking, spreading hope and easing loneliness.

Sir Tom said: "I would like us all to stand shoulder to shoulder - metaphorically!

"Let's try not to get downhearted, we will get through this, whatever is thrown at us and together we can ensure that tomorrow will be a good day."

We have 101 guests and 2 members online