India doubles long-neglected healthcare spending and sets aside £3.5bn for Covid vaccines as it eyes recovery

The Indian government has doubled its healthcare budget to Rs 2.2 trillion (£22bn), setting aside an additional £3.5bn to be spent on Covid-19 vaccines this year alone, as it unveiled its annual budget amid the worst economic downturn in its post-independence history.

Finance minister Nirmala Sitharaman presented an unprecedented pandemic budget, with measures aimed at buoying the £1.97 trillion Indian economy that is still projected to shrink further before it bounces back after the damage wrought by Covid-19.

India has consistently spent between 1.2 per cent to 1.6 per cent of its GDP on healthcare in recent years, significantly lower than other major economies including developing nations like Brazil and South Africa.

Ms Sitharaman kicked off her budget speech by announcing that the government will launch a new federal health scheme with an outlay of around Rs 641 billion (£6.4bn) over the next six years.

Ms Sitharaman allocated Rs 350bn (£3.5bn) to be spent on Covid-19 vaccine alone, saying more funds would be allocated to the cause as and when required.

“Globally, spending on healthcare infrastructure and vaccine have given countries and their economies the best bang for their buck,” Mr Poonawalla told The Independent. 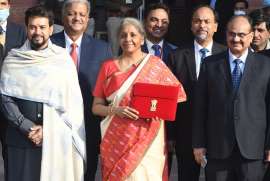 “Therefore we welcome the foreign minister’s emphasis on healthcare spending, and immunisation especially for Covid-19 and the pneumococcal vaccines as this will help India recover rapidly from this pandemic. Hopefully, this will also encourage more innovation and expansion in the sector”.

Besides the global pandemic, the budget came as India faced an internal crisis too with ongoing protests by angry farmers against reforms to the agricultural sector.

On Monday security was beefed up across Delhi with police installing additional checkpoints and barricades at various points of entry to the capital, leading to hours-long traffic jams for many. Security was heightened over fears of angry farmers marching upon parliament, days after violence unfolded in the capital on the country's 72nd Republic Day leaving one dead and several injured. In the event a planned farmers’ protest did not materialise.

The budget included several measures aimed at appeasing farmers, though nothing that analysts deemed transformational for the strained relationship with the government.

An agriculture infrastructure and development cess (a tax whose proceeds are ring-fenced for a specific cause) has been proposed to improve the sector.

Saying that the government is “committed to the welfare of the farmers”, Ms Sitharaman increased an agriculture credit target to over £165m for the fiscal year 2022.

But there was disappointment in the tourism and hospitality sectors, with little offered to help businesses that have been among the hardest hit by the pandemic.

“Not just tourism, the budget has no mention of the services sector which is the largest employment generator,” Subhash Goyal, Secretary-General of Federation of Associations in Indian Tourism and Hospitality (FAITH) said in a statement to The Independent.

Derek O'Brien, spokesperson of the opposition All India Trinamool Congress (TMC), lashed out at the government, calling the budget "sell India" and “visionless”.

He said the budget offered nothing for India’s burgeoning middle class, and that it would make the rich richer and the poor poorer.

We have 99 guests and 2 members online