When the coronavirus pandemic hit Spanish hospitals in the spring of 2020, many operating theaters had to be closed to make space for Covid-19 patients in need of intensive care. With her operations on skin tumors cancelled, dermatologist Almudena Nuño González, from La Paz hospital in Madrid, decided to volunteer at the field hospital for coronavirus patients set up in Madrid’s Ifema convention center. This hospital, which was quickly assembled at the end of March, treated hundreds of Covid-19 patients during the first wave of the pandemic. The doctor could not help but see these patients through the eyes of a dermatologist, and she began to note striking symptoms, like the so-called “Covid tongue.”

“We found changes in the tongue that until then had not been linked to Covid: the tongue is enlarged, it appears swollen, the teeth marks can be seen and it can also be depapillated, with small indentations in the back where the taste buds are flattened. It looks like a tongue with red markings,” explains Nuño González, whose team announced the findings of the research in a press release on Tuesday.

The dermatologist and her colleagues studied 666 Covid patients who were admitted to the Ifema field hospital between April 10 and 25 in 2020. The average age of the patient was around 56 and nearly half were of Latin American origin. All had minor or moderate cases of pneumonia. The study from the doctors found that more than 25% of the patients also presented changes in the oral mucosa (the mucous membrane lining the inside of the mouth) such as transient lingual papillitis (11%), which is a kind of blemish on the tongue, mouth ulcers (7%), tongue inflammation with teeth indentations (7%), burning sensation (5%) and tongue inflammation with patchy depapillation or loss of lingual papillae (4%), according to the results, which were published last September in the British Journal of Dermatology. 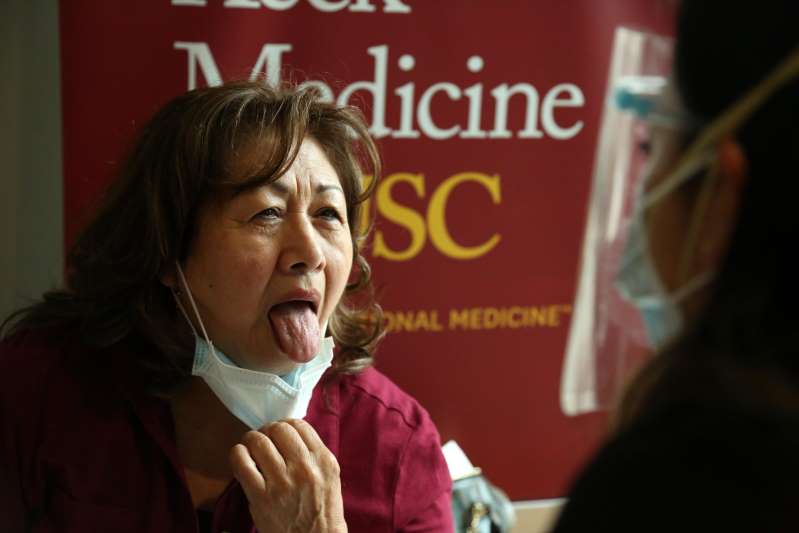 Nuño González explains that other factors could explain some of these symptoms, such as medications or oxygen ventilation, which dries out the mouth and could irritate the tongue. “The depapillated tongue is 100% due to Covid, because this is not caused by any other circumstance or treatment,” she says. “It is a finding that could help with diagnosis, like the loss of smell and taste. They are very characteristic symptoms,” she adds.

The dermatologists also detected alterations in the skin of a patient’s hand and feet in almost 40% of cases, in particular, peeling (25%), red or purple discolored skin (15%) and a burning sensation known as erythrodysesthesia (7%). In total, nearly half the patients studied in Ifema had symptoms in either their skin or oral mucosa.

Many experts have been warning about these possible symptoms since the first wave of the pandemic. In May, for example, Carmen Martín Carreras-Oresas, from the European University in Madrid, published three cases of mouth ulcers or blisters allegedly associated with Covid-19. In July, the odontologist Milagros Díaz Rodríguez, from the same university, described another three cases of symptoms in the oral cavity linked to coronavirus, such as a burning sensation and loss of lingual papillae. Nuño González says that these early reports were received with skepticism, as they only dealt with a few cases. “By studying such a large number of patients, we have been able to show that these symptoms are related to Covid,” she says.

The British epidemiologist Tim Spector, from King’s College in London, also said recently that he has been receiving dozens of reports of tongue problems via the app ZOE, which is used by Covid-19 patients to describe their symptoms. “Spector has corroborated in the general population with minor Covid-19 cases, who stayed at home, the same things that we have seen in patients admitted with pneumonia,” says Nuño González.

A delight- My mail is full of tongues each morning from people who had tongue problems that coincided with Covid symptoms like fever and fatigue - but baffled doctors. Happy to share so we all become experts... pic.twitter.com/y2CEUpZz8o

But there has been more research into the skin symptoms associated with the coronavirus. Last April, the Spanish Academy of Dermatology and Venereology published a study of the most common skin manifestations of Covid-19, such as chilblain-type inflammation and blistering. Nuño González believes that symptoms affecting the mouth went undetected at the beginning of the pandemic due to the initial chaos. “At the end of March and in early April, there was a lot of fear of the disease. Patients were made to wear a face mask for as much time as possible, and often their mucosas were not examined,” she explains.

We have 76 guests and one member online